They call William Spencer the "skate ninja" because of his insane moves on a skateboard, which have made him famous through his youtube channel. Well, it seems like that's not all he's good for, as details emerge that Spencer was the main stunt double for the actor playing Spider Man in the latest comic book flick. And by the sounds of it, lots of the effects were shot in real life, as opposed to animated by CGI later. Very impressive stuff. 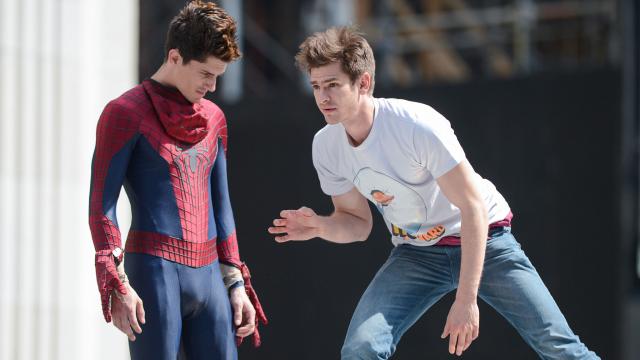 In one eye-popping scene in "The Amazing Spider-Man 2," Spidey is pursuing a villain through New York. The masked hero nonchalantly walks into the street, grabs ahold of a speeding postal truck, and gets yanked away out of frame. It's a tribute to a stunt from a 1922 Buster Keaton short, "Cops," and it was accomplished the same way the silent film star did it: no wires, no CGI, just one strong grip.

William Spencer is the stunt double inside the Spider-Man suit for the scene in the movie, and he told Yahoo Movies that what you see on screen is exactly what happened on the set. "If I had my arm stretched out and grabbed it, it would have ripped my shoulder out," Spencer said by phone. The key to staying safe, he revealed, was "to grab the truck as far to your left as you can, to have as much leverage as you can and as much time to catch up to how fast it’s going."

Spencer admitted he did "a lot of one-arm pull-ups" to get in shape for the stunt, and made sure there was a sturdy handle on the truck with a good grip that he could latch onto. Star Andrew Garfield helped Spencer perfect Spidey's leisurely stride to really sell the effect. Spencer said once he grabbed the truck, "I swung my legs up and tried to get them as straight as possible as quick as possible so the whole gag is you leave the frame still being dragged like a flag." Then once he was out of the camera shot he came back down, alternately on the back of the truck or on the ground alongside the vehicle. 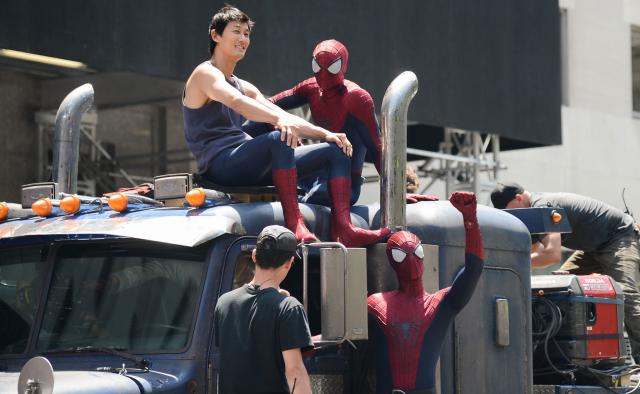 Ilram Choi, William Spencer (above) and Andrew Garfield on the set of 'The Amazing Spider-Man 2' (Ray Tamarra/Getty Images)

Spencer cultivateda a devoted following for his skateboarding videos, where he's known as the Skate Ninja, before he got the call for another kind of aerial acrobatics. He was first approached to do stunts for the original "The Amazing Spider-Man" before the lead role was even cast, but because of a communication error he missed the audition. However, after Andrew Garfield got the job, Spencer got another call to be his skateboarding double. Since he was such a good match for Garfield's look and body type, and had stunt experience beyond just skating, he became Spidey's stuntman both in and out of the costume.

Sometimes making it look right takes up to three Spider-Men. For one stunt in the sequel, Spider-Man is clinging onto a semi truck driven by Aleksei Sytsevich, aka the Rhino, and he pops in and out of the window to taunt the villain. That was all done practically, with Garfield on the outside of the truck and stunt doubles Spencer and Ilram Choi hanging on to the top as the vehicle sped through New York City. "That's probably the only time that we've ever all been suited up at the same time doing the same scene," said Spencer, "so it was kind of fun."

The trio of Spideys had the advantage of a redesigned costume that made it easier to do tricky stuntwork. The first improvement was in the mask's eyes, which were made from the lenses of sunglasses in the first movie. Spencer said the eyes on the new suit are "a lot bigger; it’s a lot more visual range." But the nature of the character's iconic look meant that there would always be some trouble with seeing the full picture. "The hard part is, no matter what, you can’t see [when] looking straight up as far as you can without them," Spencer admitted. So for safety's sake, "you just have to practice with the mask on all the time."

The other change in the suit spoke to Spencer's background as a skater: Spidey's new shoes. In the new design, the soles of the suit were adapted from Vans' skate shoes, which Spencer called "a huge improvement [over] the last movie."It was really nice change this time to have the soles of the shoes be something that was incredibly grippy," he said. "You were just secure." And security was certainly what Spencer and Garfield were looking for when they were standing on a narrow ledge 21 stories above the ground. 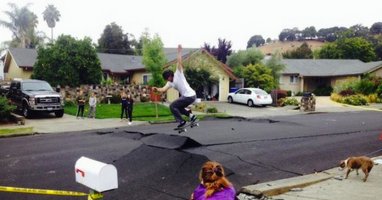 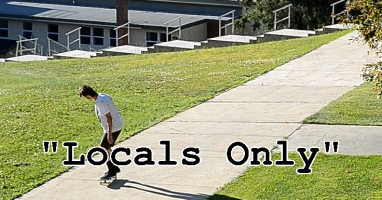