Talk about lucky! This is just insane. (skip to 1:55 to see the meteorite)

One summer day in 2012, Anders Helstrup and several other members of Oslo Parachute Club jumped from a small plane that had taken off from Østre Æra Airport in Hedmark.

Helstrup, wearing a wing suit and with two cameras fixed to his helmet, released his parachute. On the way down he realised something was happening.

“I got the feeling that there was something, but I didn’t register what was happening,” Helstrup explained to NRK.no.

Immediately after landing, he looked through the film from the jump, which clearly showed that something did happen.

Something that looks like a stone hurtles past Helstrup – clearing him by only a few metres.

Later that day, Helstrup returned to Oslo. But he could not stop thinking about his strange experience, so he took time off from work to go back to the Rena area for a couple of days to look for the stone – but with no luck.

By then, Helstrup had already formed the idea that it was a meteorite that flew past him.

“When we stopped the film, we could clearly see something that looked like a stone. At first it crossed my mind that it had been packed into a parachute, but it’s simply too big for that.”

“The film caused a sensation in the meteorite community. They seemed convinced that this was a meteorite, perhaps I was the one who was the most sceptical.”

Although Helstrup is still not completely convinced that it was indeed a meteorite that flew past him, the experts are in no doubt.

“It can’t be anything else. The shape is typical of meteorites – a fresh fracture surface on one side, while the other side is rounded,” said geologist Hans Amundsen. 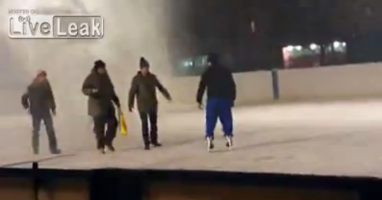 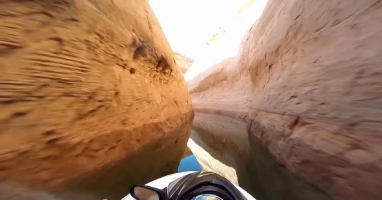